UPDATE September 1, 2021 : I’m unsure which Coast2Coast entity was involved with this signing so all I can say is someone using an alias name (based on his phone number) had the borrower search for an NSA who made an appointment and provided an address. Then the alias person stepped in last minute to root me out for the signing due not not having snap docs approval, something I never encountered before.

UPDATE: 8/30/2021 I sent this issue in an email to Coast To Coast Signing Agency that denied they had any such staff member. I’ve since learned this guy was hiding behind an alias too. I also sent it to Coast2Coast Mortgage and they said they don’t work with the guy.

A borrower or their assistant contacted me for an after-hours signing. I offered a nice hotel location they refused due to the signer being a biker and the huge incline in that area. I was then put on a 3 person texting communication and arranged for address and time. I noted I was suddenly being scrutinized without confirmation due to Coast to Coast lurking in the background. I was texted if I was SnapDocs approved. I said NNA certified but was on SnapDocs. I didn’t know yet an agency was behind this question. Then I suddenly got a frantic call from Coast to Coast and was just disgusted this agency was involved with my borrower relationship.

How sleazy that this agency believed I would want a signing like this! I told him I’m not working for his agency and ended the call. So cheesy is this agency to operate this way instead of just calling me in the first place. I was put on text hold for my own approval at Coast’s request and made to seem I lied that I was on SnapDocs. I wasn’t “snapdocs approved” but still on SnapDocs. I didn’t want to take their test and never will.

Coast to Coast humiliated me claiming I wasn’t on SnapDocs, then I got a threat from the borrower of a bad review after all that. The borrower lied saying Coast to Coast was his mortgage company. I told him a lawyer will contact him if he does. I’m not kidding.

I really just don’t understand what happened. Don’t think SnapDocs ‘approves’ anyone. Only thing I’m aware of is ‘SnapDocs verified’ (where you’ve provided a photo & your D. Lic.). Far as I know, SD does NOT have any test. Unless that’s some new thing they just began.

Snap Docs was sent all required documents and I never received one signing. They promised tons of work. There seems to be some test to be Snap Docs approved they once emailed about. I won’t take anymore tests. I have the notary commission exam and NNA cert exam and that should be just fine with my 10 years of experience. They should pay us to take their tests. It’s really getting to be ridiculous like the days back when you had to take a typing test when it was clear you had job experience and years of word processing that it was entirely unnecessary.

This was one of the most confusing things I have ever read to be honest…I could not even make sense out of it.

As the saying goes…If it sounds fishy it most likely is. If an offer doesn’t sound right to you just turn it down. There are too many legitimate offers from well-established trustworthy companies to accept anything that you don’t feel comfortable with.

I’m no longer taking assignments from Coast 2 Coast. They are shady and change up the terms on you last minute, like asking to have 200 plus pages scanned back before shipping. Then they will not respond to requests for scan back fees or requests for large package fees. They low ball you. Just be aware. Good luck out there.

Coast2coast is absolutely amazing if your new

Can someone explain what happened? I’m lost.

Well I just learned he was using an alias “Gabriel” and have reported his real name and phone number to the agency.

Sorry for the confusion. So the guy who intervened and took away my signing was using an alias “Gabriel” so I suspect he used the borrowers to do his job finding a notary and then had to screen me for Snap Docs approval based on his contractor. He called claiming to be Coast2Coast. So I reported his alias and am waiting to hear back from the agency.

Sorry for he confusion. So the legal issue is the borrower established me as the NSA with an appointment time and location. Then a man with an alias of Gabriel, (not the actual guy), was placed with me with three others on text call. The borrowers told him I’m their notary and he then screened me about Snap Docs qualifications I’ve never encountered before.

The alias Gabriel looked me up and said I wasn’t there, but I am supposed be because I uploaded my documents there last year. Anyway, the issue is his demand to be Snap Docs approved is bogus, I’ve never had this issue before. He could have found a notary that way instead of having the borrowers look for one. The agency was given the other identity of who really called me afterwords and said they didn’t know who he was. I’ve sent new info to them awaiting info. 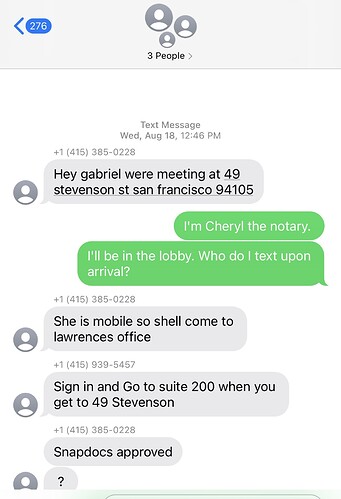 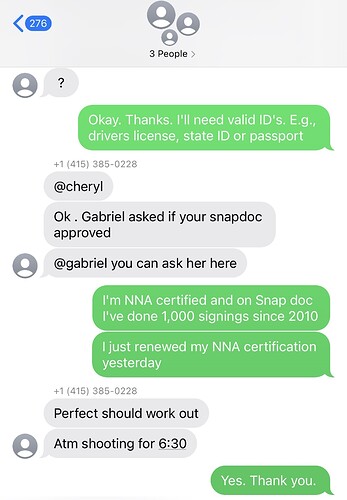 Look at what they did to my signing, some guy with an alias of Gabriel interrupted and stole my signing that was all set to go. He then phoned me after humiliating me that way saying he was Coast2Coast.

That’s why it’s so strange, I don’t understand what really happened. Someone stole the signing from me I guess.

I never took their test and they contacted me to take it saying I’d get more signings but I said I didn’t want to take their test so they may have taken down my profile. I can’t log in.

There are many companies in this business who call themselves Coast2Coast I learned. Mortgage companies, Lending companies and only one signing agency.