I spoke to a title company today and I heard the frustration in the voice of the rep. She was telling me that it’s getting harder and harder to close some of the packages she assigns due to common and repeated errors.

NOW BEFORE EVERYONE START TALKING ABOUT “They get what they pay for” and take this discussion around the fee being paid… please keep in mind regardless of the fee being paid as professionals we have a duty and responsibility to deliver a perfectly executed package. If you are a notary old or new yes noone is perfect and we all will make a mistake here and there but keep in mind that knowing what to look for and avoiding these errors builds good reputation and repeat business.

I asked her to share them with me this is what she said.

1- RTC is being signed in the wrong area. Sometimes when done and discovered at the table the notary crosses it out and initialed by the borrower and resigned at the acknowledgment section. The proper thing to do is have a clean one signed correctly.

2- Not returning all the pages to the W-9 form. Sometimes lenders have barcodes on the bottom and this is considered an incomplete package when not returned.

2- Patriot Act form. Not paying attention to how many ID’s are required.

4- Missing dates and missing stamp is an on going problem.

7- AKA-Signature document- she said there was so many errors on this document that she could not bother to go through the examples. (Often times the instructions on how to complete is included and not followed):

8- 1003- she did say that there is an improvement on the Initial area on the form when there are applying for joint credit… but it is still being missed.

So there you have it folks directly from one of my top title companies. As always ( speaking to the new notaries entering the business, because the vets already know this) if you ever get a package with little to no instructions or are ever unclear always reach out to the person who assigned you the package.

Share your videos with friends, family, and the world

Yes…. We have all had that discussion on other posts… let’s not use this one for that if you don’t mind.

This is good stuff! I almost missed a stamp on the signature page lst night. Thank goodness for knowing to triple check!

Yes, I understand, but it all revolves around the fee and there is no way around it.

Not all states will allow their notaries to put “A/K/A” in their certs … CA primarily and there may be others. Unfortunately, many title companies and lenders do not heed the laws of the specific state…they want it done their way no matter if it is legal for the notary or not.

I agree with you…and that is why it is our responsibility to know the laws of our states and prepare to defend them when we see something that go against it. For the record that was not the example she gave. I just used that one based on the standard instructions that was given To me yesterday by another lender. I just couldn’t remember the one she gave… it was a 20 min conversation

I agree, Coast2Coast U has some great videos as well as Notary Stars.

Thank you for your sharing. It’s helpful for me, a new signing agent.
I will sign one case on Monday morning. I am really nervous. I hope I can complete it perfectly.
When I review the documents and instructions, I have some questions. Can anyone give me the suggestions?

Thank you in advance!

May I ask, @chynotary , where did you purchase your professional signing agent training curriculum please?

For the various queries posed within your post, it’s important for you to reference a reliable and trustworthy source for the answers to ensure you’re able to execute the document package perfectly & completely.

As noted above, the answers received could vary widely from state-to-state on many generic questions based on the laws within each respective jurisdiction.

NOTE: All viable professional signing agent training curriculum programs (that I’m cognizant of) encourage their students to review the data in the training materials and to reach out to their organization directly with any queries or for any needed clarifications.

Will only address a few points here:

#1 - if you mean a 1003, yes, the loan application - call hiring party for clarification on their instructions - these may be old instructions they’ve failed to update.

#2 - NORTC - Have all copies signed and you are two leave two copies for each party in interest - so two people on the Deed of Trust/Mortgage - 4 copies left with them - and however many hiring party wants returned - you may end up getting 6-8 copies printed and signed.

Ugh I made mistake #2 ( the number of identification required on the Patriot Act Form ) today. Absolutely embarrassing

Girl… I hear you I always give them two even when they ask for one… one less thing that I have to think about… that was the advice given to me from one of my directs. They won’t care if you give them two even if they only need one.

I’m going to do that from here on out!

Here’s the way I address that particular potential pitfall . . .

The Patriot Act form has listed within it the number of IDs required for each signer.

When I reach that document, I immediately ENCIRCLE the number of IDs required. 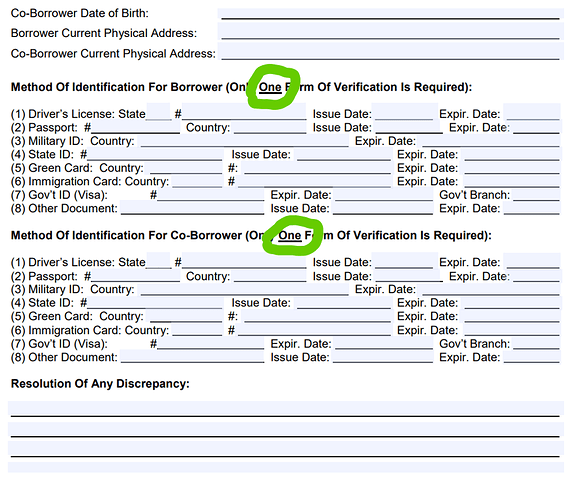 Thank You!
This particular one had language it it that’s states they require 2 forms of identification. It was totally my fault for overlooking that language. It was for a lender I was unfamiliar with but now I know not to be too overconfident.

I do the exact same thing. And I don’t take my own photos of the signers’ ID anymore. In the crazy days of last year, I did but NO MORE.

To add here, some lenders have their own ID verification form in ADDITION to the Patriot Act form. Make sure the Patriot Act form has what its asking for (number of proof of ID’s and discrepancies). Uncle Sam could care less what an individual lender wants! At a minimum, make sure both forms match if you do get one of each.