When a new public officer, such as a notary public, justice of the peace, or member of the town select board, takes an oath of office before a notary public, the oath/affirmation form almost always contains the new officer’s name. Is the officer swearing to the correctness of the name? I’m interested in Vermont or any other state that has passed the Revised Uniform Law on Notarial Acts.

I don’t think an officer is likely to lie. But the notarial certificate I use could be different depending on the answer. If the officer is swearing to the name, I can use the certificate for a verification upon oath or affirmation. If not, then the law does not provide any short form certificate and I have to compose a suitable certificate.

the oath/affirmation form almost always contains the new officer’s name. Is the officer swearing to the correctness of the name?

Are they? Think about it - read the oath they are taking- does it state they affirm/certify that they are so-and-so OR is it just a statement of their name, a case of them identifying themselves the swearing to uphold the laws and to carry out their duties blah blah.

My answer to your question? No.

Disclaimer: Not in VT but my .02 FWIW

The new public officer not only take an oath/affirmation to his/her name/Identity but also take an oath/affirmation to follow the laws and duties as set forth according to the job and the scope of practice, etc., basically the new officer swear/affirm to his/his name/identity as well as to do the job according to law as permitted for example as notary public and to follow the law, trained or certified as required by state.

the new officer swear/affirm to their name

They do? Where?? They state their name (in some) - they don’t swear or affirm anything at all about their name. The oath of office is a solemn promise (or vow) to perform the duties inherent with the position and sometimes a vow to uphold certain laws.

This is according to my state anyway. 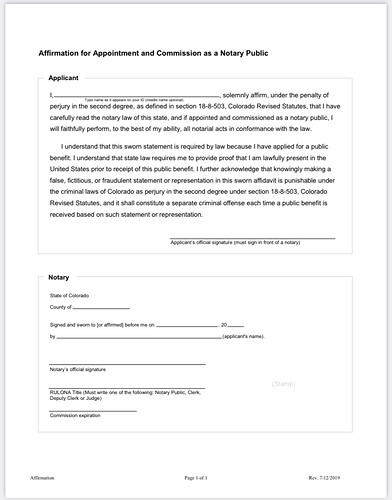 Interesting ! I wonder if this differs with each state?

The example given here is for a Notary Public, what about office as a commission member, such as a town council member?

I don’t know, but I am sure any public officer appointment/commission have their own version?

And you’re still not certifying or affirming your name - you’re just stating your name.
You’re not stating “I swear (certify, affirm, whatever) that my full name is so-and-so…”

Unless the third paragraph covers that about making false representations.

The oaths for all offices in Vermont are the same. Here’s the one for notaries. Notice it has the name and address of the new notary in a box; the oaths themselves are in a separate box. The form is online.

The first oath is an oath of allegiance to Vermont and it’s constitution. The second oath is to perform the office faithfully. The oaths are only slightly different from how they appeared in the Vermont Constitution of 1777, section SECTION XXXVI.

I agree with @LindaH-FL here, they are simply swearing/affirming to the oath of the “office/position/duties” they are about to fulfill. The input of the persons name is there just to record who is taking the oath and assuming the position/office/duties that come with that oath. The persons name is taken and verified during the application process. In my state, the person giving the oath verifies that the ID of the person taking the oath matches what they put on their application before giving the oath. Unless someone has a “valid” reason to question one’s name (which the “oath taker” would be made aware of), I really don’t see what the purpose would serve to have someone swear/affirm to the accuracy of their name, because that’s what a VALID ID is for, as the name on their ID came from (or should have) via VALID/CONFIRMED birth/marriage/SS documentation. Verify the ID of the person taking the oath, make sure they use that name when taking the oath, then sign/stamp away. Outside of that, however they want to interpret it, or take away from it is on them (just looking at the language) IMO.

Since the discussion has become quiet, I’ll summarize my position for now.

Several states that passed RULONA, like Oregon, have notary manuals which indicate notaries must identify the principal for every notarial act.

Another RULONA state, Pennsylvania, with exactly the same wording in the law, has a different interpretation, hidden in a web page addressed to court reporters who are also notaries. It says:

It is the Department’s interpretation of section 306 of the Revised Uniform Law on Notarial Acts (RULONA) that neither a certified copy nor a purely oral oath or affirmation relates to a statement made in or a signature executed on a record. Therefore, these two notarial acts do not require personal appearance before a notary public or identification of the individual taking the oath or requesting the certified copy/deposition. Pennsylvania notaries who certify or attest a copy or deposition and/or administer a purely oral oath or affirmation, such as a testimonial oath in legal proceedings, may perform these acts for remotely located customers without becoming a remote notary. This does not apply to the notarial act of administering a written oath or affirmation, where the oath also is signed by the customer. An example of a written oath is the notary public oath of office, which taken by the notary before entering into the duties of the office, reduced to writing and signed on the bond form and recorded.

So PA doesn’t go along with the other states that the notary must always identify a person taking an oath. But in my opinion they just didn’t notice the distinction between a verification and other written oaths.

Some States have specific wording as to taking the Oath of Office. Always follow your State’s laws.

I agree about following my state’s laws. But after watching hearings in the Vermont General Assembly about my state’s notary laws, it’s abundantly clear that the legislators and the lawyers who work for the legislature don’t have a clear understanding of the state’s notary law (old or new). Maybe the people in the Office of Professional Regulation within the Secretary of State’s office understand it, but they don’t see fit to answer my emailed questions. I wouldn’t bet more than a piece of used tissue paper that they understand it.

To summarize my previous post, “usually” when one is onboarded for a position that requires an oath of office, the entity giving that oath already verified the identity of the oath taker through the onboarding process. The oath of office is just that… the oath taker is merely finalizing the onboarding process by affirming/swearing to the T/C’s of the position/office itself. Or what I call, your signature on a contract (just verbal in oath cases) and “commonly” doesn’t require a “notarial act” to sign (whether written or verbal). In government cases, your hand on the bible is the notary, not the person giving the oath. It’s the recording of such oath that holds the weight, not the person giving the oath necessarily, as all that do give such oaths are not notaries.

When one is beginning certain government positions, one must take an oath of office. The person administering the oath must be authorized by law to give the oath for the position in question. In my state, for most purposes, “oaths of office may be administered by any Justice of the Supreme Court, Superior judge, assistant judge, justice of the peace, notary public, or the presiding officer, secretary, or clerk of either house of the General Assembly, or by the Governor.”

Frequently, the onboarding process consists of voters voting for the new officer. In the case of notaries public, the application is done online in my state; the only way for them to know if the new notary is who he/she claims to be is if the notary administering the oath of office checks the identity, and it isn’t clear if the notary administering the oath is obliged to check the identity.