If a signers name on ID says Christopher and they sign the document Chris, is that acceptable?

Your profile does not indicate what state you are in. My state, Vermont, has passed a slightly modified version of the Revised Uniform Law on Notarial Acts. One of the versions available contains official comments, and one of the comments says

So I would consider that comment as I was deciding whether to notarize, and if so, what name I would write in the notarial certificate. But you left out a fact. The ID says Christoper. He is writing “Chris” with his pen. But how is his name printed in the document?

The ID says Christoper. He is writing “Chris” with his pen. But how is his name printed in the document?

And how is it signed on the ID?

Problem with this is even if the notary can accept his “Chris” - if he holds title as “Christopher”, and he signs “Chris”, title/lender or document recipient may not accept it.

If loan doc signature line says CHRIS SMITH, then I would instruct them to sign as Chris Smith. 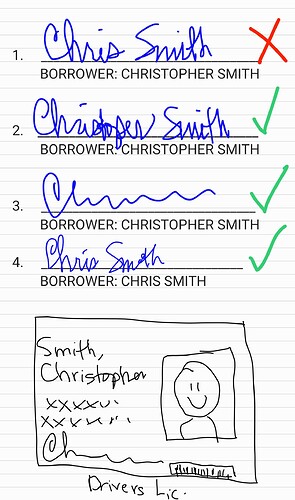 For their signature in my notary journal, ideally it should match the signature on the ID they presented me. But I accept whatever signature they provide me, as I understand signatures can change as we get older due to age or injury.

I try and keep it simple on this one, as one’s signature is a “habitual” thing developed over many years of signing their name. I’m not in the business of changing “habits,” as that alone creates discrepancies. I simply tell them: “You see the way you signed your license? That’s the way you sign the docs and my log.” NEVER had a problem! Hope this helps!

An individual’s license says his name is William Brown. However he attempted to sign, as he always does, “Bill Brown.” You tell him he has to sign his name matching what is printed on the license even though he states he ALWAYS signs, and is known as “Bill Brown.” You tell him you won’t or can’t notarize the document unless he signs as William Brown. Because he is in a hurry and needs the doc notarized he does as you have forced him to do and signs William Brown. You also have him sign your journal as William, no notes or AKA/PKA etc. Life goes on…

A year later the validity of the document is challenged in court. Let’s say Bill is disputing that he signed this document. What you have to offer as evidence are two signatures that do not match hundreds of examples over the past 20 years of his signature on documents like written checks, tax returns, legal documents, etc. It’s almost like you set yourself up… just my 5 cents, lol.

Reasonable reliance or something similar is the “standard” that should be used. Can you reasonably determine, from the identification given that the signer is who they say they are. For instance is it reasonable that somebody named Christopher would be known and sign as Chris? Do they have alternate identification? Is there a credible witness that can vouch for them (if allowed in your State)?