I’ve just been asked to notarize by first will. After looking over the self-proving affidavit I’m not sure whose name goes on the first line. I believe it should be creator of the will but some of the info I found online said it should be the witness names. Hoping someone could clarify for me. 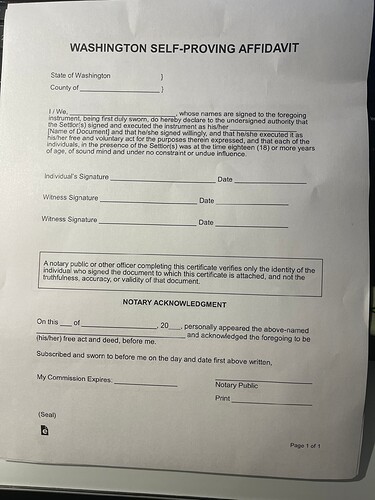 In “most” states, the testator(s) (creators) of the will would sign the document. But Washington may be different. I found this article that may help.

The thing to know is that sometimes wills get challenged, and everyone involved, including the notary, gets sued. So I don’t do wills, ever.

If you’re still not convinced, I would ask who drafted the will. If it wasn’t drafted by a Washington attorney, run as fast as you can.

If it was drafted by a Washington attorney, write down the attorney’s name in your “never do business with” book and then run away. That document is a mess.

Its never a good idea to advise…, but with that said, this document is self explanatory on what to do and who’s names are to be printed there. I would do some more research for the correct answer and whom ever issues you notary license is always an official source of information, mine being the Secretary of State office

Witness names go on first line - they are attesting that the “Settlor” (signer) signed it willingly, was of age, and of sound mind. Then, from what the form says, all parties sign the Self-proving affidavit (which is odd to me - normally only the witnesses sign that). This affidavit is used to prevent them having to appear in Probate Court to testify should anything go awry (i.e. if the Testator/Settlor passes away and the witnesses are nowhere to be found, this Affidavit will stand).

If you’re still not convinced, I would ask who drafted the will. If it wasn’t drafted by a Washington attorney, run as fast as you can.

Disagree here - unless law prohibits it, a notary can notarize the will and self-proving affidavit - it’s a notarization, which is what we do! Contents are not our concern - Testator/Settlor’s state of mind and willingness are our only concern.

If it was drafted by a Washington attorney, write down the attorney’s name in your “never do business with” book and then run away. That document is a mess.

Why??? This document is NOT a mess - it’s a Self-Proving Affidavit - common in a Last Will and Testament. As I said previously, the only thing I find odd is the Settlor signs this portion too - but if that’s how it’s drawn, again, not our circus, not our monkeys - we notarize, we don’t analyze.

What is messy about the affidavit? It refers to the Settlor (which is a odd title to refer to the person making the will) “whose names are sighed to the foregoing instrument” but there is a place for the “Individual’s” signature within the self-proving affidavit. So who is the individual?

The top of the self-proving affidavit says, about the witnesses, “being first duly sworn”. So this is an oath. But wait, the notary certificate has both acknowledgement language and oath language. So which is it?

The notary certificate does not conform to any of the short-form certificates authorized by Washington’s version of the Revised Uniform Law on Notarial Acts (RULONA). RULONA allows the notary to either use a short form certificate spelled out in the law, or

(Law may be found here.)

The idiot box swiped from California is essentially the notary giving legal advice to whoever is reading the document. That’s OK for CA notaries since the law says they have to include it, but notaries in other states should not dispense unsolicited written legal advice.

The top of the self-proving affidavit says, about the witnesses, “being first duly sworn”. So this is an oath. But wait, the notary certificate has both acknowledgement language and oath language. So which is it?

No - it’s an oath - they are swearing that the Settlor signed willingly and it was their free act and deed. By virtue of their witnessing the signing they can swear this is so.

I said I didn’t understand why the Settlor is signing this…but if that’s the way it’s drawn, perhaps it’s meant to show the Settlor’s acceptance of the two witnesses.

And this, technically, doesn’t fall under your standard Notary law or RULONA - the wording of the Self-Proving affidavit is dictated by the Probate Codes of the state…hence “Self-Proving Affidavit”.

P.S. Correction - I went and looked again and scrolled farther down - you’re absolutely right - this requires a jurat, not an ack. Mea Culpa - I overlooked the lower portion of the page initially. Sorry Ashton

And this, technically, doesn’t fall under your standard Notary law or RULONA - the wording of the Self-Proving affidavit is dictated by the Probate Codes of the state…hence “Self-Proving Affidavit”.

Just out of curiosity, I poked around in the Washington law and on the internet. There are laws describing the general concept of a self-proving affidavit, but I didn’t see anything giving any mandatory or recommended wording that came from the state government. Of course there were plenty of internet sites that had recommended wording, but I wouldn’t trust those.

You need to look under the probate code of the state - that’s where the information would most probably be. JMO

Fact remains - this form requires a jurat, not an ack as you pointed out.

It does indeed require an oath, but what kind of oath? That is actually the subject of another thread I started almost 2 years ago. I have also been corresponding with Vermont Deputy Secretary of State Chris Winters because there is a bill in the Vermont House which may update Vermont’s version of RULONA to the latest version.

If I had to do a self-proving affidavit before this issue is clarified, I would probably look at the ID of the oath takers and use an oath certificate that says something like

Before me on February 20, 2022, appeared Ira Allen and Ethan Allen, who are known to me through satisfactory evidence, which was unexpired Vermont driver licenses, and I administered the aforementioned oaths to them.

DISCLAIMER: When I write that it definitely requires an oath, I mean that if I needed to make out a will and the attorney creating it wanted the witnesses to acknowledge the self-proving affidavit, I would pack up my papers and find a new lawyer. What readers of the forum do is up to them. This is just a discussion of pending legislation, not legal advice.

On a side note “self proving” simply means that the process does not require an oral testimony to be admitted into a probate process, the act just needs to be witnessed. Some require one, two or more witnesses depending on the type of transaction and the state. Also, check with your state laws, some allow the notary to be a witness, and some do not. In either case, its a simple “notarial act.” As LindaH-FL stated, you did not draft the documents (either the Testator did it on their own, or an attorney did it) so I wouldn’t let the fear of the “format and contents” deter you from the job. Shrink it down to what the individual form (act) is asking of you. Basically, you are only responsible for what you do or don’t do as far as the notarial act itself is concerned, not what the “creator” of the documents did or didn’t do. Hope this helps!

I refuse to handle wills and estate documents unless they come directly from an attorney. I was recently asked to notarize a set of documents so a young ma could gain access to funds in a trust setup by his grandparents. The documents were drawn up by a fiend of his who was a paralegal. His Grand parents were still alive and unaware of what he was up to. I told him it’s illegal in Texas for a Paralegal to draft these types of documents. I then sent his information to the local Constable’s Office for investigation.

So to play Devils Advocate on this, I look at these types of transactions like a loan package. If you go to a REFI and have it signed, sealed and delivered, and the lender (or the borrower) realizes after the fact 3 credit cards were to be paid off as a result of the transaction, and it wasn’t included in the docs, not your problem as the signing agent. Shrink it down to what they are specifically asking of the Notary. If one is “concerned” about contents, or the fact a lawyer is involved (which shouldn’t be the case), then they simply shouldn’t touch it. It is our education and experience that gives us the confidence level to do our jobs. With that being said, more education and experience will prove more beneficial for a Notary to not turn down business (IMO). If it’s any reflection, Lawyers are frequently involved in real estate transactions as well (usually on the back end), so “fear” of legal process doesn’t generate a lot of revenue. Just my 2 cents!

With a loan package, especially a refi, if there’s a mistake, the lender or the title company can fix it. If it’s a will, and the problem isn’t discovered until the testator dies, it’s too late to fix it. Either the heirs work out a compromise, or everybody’s headed to court.

Agreed. But I guess the point I am trying to make is how is that “legally” our problem? If you don’t mess up the notarial act being asked of you, what (or who) they did or didn’t include in the docs is not our problem. Yeah, anybody can drag everybody into court, and if you are included in that, as long as you didn’t mess up the “notarial act itself,” a lot of time and money was wasted by dragging you in. ANY competent Judge (and Lawyer for that matter) knows you as the Notary didn’t draft the docs. So IMO, dragging the notary in a lawsuit who performed their duties as prescribed by law is just them reaching for straws, or not knowing the process themselves.

My view is that for the $50 or $100 one might charge for general notary work, it isn’t worth it to take assignments that have a higher than usual risk of going into court. I’ve just heard a lot about wills getting contested. Even if the court dismisses the notary from the case, or finds in the notary’s favor, there could be substantial legal expenses, and depending on what the notary is alleged to have done wrong, E & O might not cover it.

Agree again. Wills get contested frequently (mainly by a beneficiary who wasn’t included, whether a mistake or not). The individual Notary’s confidence level in knowing what their doing and why they are there collaterally reduces the risk. The Notary can always counter sue for expenses once they were found cleared by the Judge. In my state, I don’t even have to file a lawsuit to get reimbursed. I can simply proactively admit an invoice with supporting docs for expenses as an “exhibit” to the current case, and get automatically reimbursed once found cleared by the Judge. As you stated, E&O only covers negligence on what the notary did and didn’t do in regards to a “Notarial Act.” This is why I carry Professional Liability insurance as well. Anyone can sue you at anytime for whatever reason, regardless of the transaction. For example, if I did a REFI and I didn’t make the drop off in time, hence causing the loan not to fund in time, the lender/title company/borrower “can” sue me, but E&O wouldn’t cover, because the task of dropping the docs on time was not a “notarial act,” but the Professional Liability would cover it (depending on coverage purchased).