I just recieved a request for a loan mod from the Signing Agent platform to be performed tomorrow between 8-11 am.
I bid it high and about an hour later recieved a confirmation that I recieved the job.
Here’s where things get really fishey…
I log on to signing agent and there are terms and conditions to agree to before the docs are available.
I read these VERY VERY carefully just because of things like this.
The first set of terms were normal requests, albeit quite a bit demanding, but not unusual from some of
these companies.
THEN the next set of terms to agree to were the following…and I kid you not…
See the circled portion below. They actually want us to agree to provide our own cashiers check for closing if the check gets lost because we didnt staple it???
Um no absolutely not agreeing to that!
Then I email them to take me off the job because of this strange, and possibility fraudulent request and thier response was “if it makes a difference there’s no check due”
Okay first off, there’s no check due, but you want me to agree to supply you with a check for closing if the check thats not even required gets lost? Hmmmmm…
I’m not sure if someone just worded this term request very poorly or if its a scam, but I sent it to signing order support and they will be investigating it.
Either way, if one were to click on that and agree and one could potentially be liable. I just wanted to let you all know. This came from a company called NotaryZoom.
I have never worked with them before. 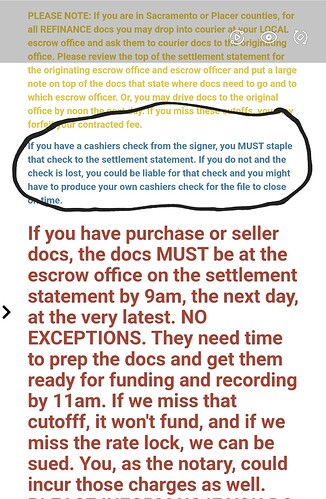 Okay…I read this a bit differently - what they’re saying is make sure you staple the check to the settlement statement to avoid loss; if you do not and the check is lost you will be on the hook to pay the funds due at closing due to your failure to follow directions (it’s a threat, mainly)

What I take exception to is the rest of it - the package MUST be at escrow office by 9AM the next morning; if this is their requirement across the board this is a physical impossibility for most.

I think you’re right - this is just worded badly

They sent me another email last night and said that once “A” notary lost a check and that’s why we basically carry E and O insurance for mistakes that we make and are liable for (still not sure how a lost check means we would cover it ourselves?)
They continued on to say that all SS have this in thier contracts and we just don’t know it because they dont point it out, essentially we are are always liable to cover misplaced funds.

They assured me that they were a fair company, but yet that was really not at all assuring😒

I just again asked them to remove me from the job. A couple hours after the finally removed me.

Uh huh - guess they don’t realize that standard E&O covers notarial errors only and offers no coverage for lost checks or any errors in the handling of the closing package.

I had an incident once - got a call that I hadn’t returned the cashier’s check for funds to close - well, when I did them I used to staple or scotch tape the check to the HUD right above the “Funds Due From/To Borrower” line so it showed the amount of the check matched the funds due. I asked the caller "did YOU open the package? She said no - so I told her check with whoever opened that package. Sure enough - check was in the FedEx envelope in her trash can.

I do agree with them on this point, though - if we’re responsible for the return of funds and WE lose that check, then it’s our pockets on the line - unless the borrower is able to put a stop payment on their certified check or on their cashier’s check. But yes, the loss is on us.

I would never accept an agreement that made me responsible for a lost check. The reason is that usually there is no foolproof way to know who lost it. Did I lose it? Did someone who’s good at opening and resealing envelopes steal it while it was in transit? Did an employee at the title company lose it?

Am I going to risk thousands of dollars on the idea that a pair of staple holes means I’m not the one who lost it? No.

I agree we are definitely responsible for getting things where they need to go.
Its just too bad by being so overly forceful and threatening, they are throwing red flags of fraud all over and we already have to be very mindful of that because we are putting our names on the line…literally.
I have noticed some companies tend to do this threatening tactic more than others where it should be seen more of a teamwork process.

That is so very true!
Also, why would they put this in thier agreement when supposedly there is no check due anyway?
Being that you have to agree to personal responsibility of the check or you can’t get the documents, just leaves us open to potential liability for any mistake, misplacement or error on anyone else’s behalf thats involved and it also states that in the bottom portion of the agreement. No thanks!

Fyi, SS e&o does cover you guys losing checks, committing cyber fraud, etc, IF, you add it to your policy.

Thank you so much for that information.

Me personally, I see know fraud intent here. What I do see is a contract with terms and conditions. And yes, if you were to accept the job, you agree to those T&C’s. We routinely collect checks all the time for numerous transactions. I’m not aware of any stories of notaries “losing” checks (not commonly known), but maybe they have experienced this before (maybe recently) and are now simply covering themselves. If we accept a job that requires the collection of a check, chain of custody procedures clearly define we become the owner of that check until it gets to the next person/entity in the “chain.” ANY client can penalize us, or pursue legal action against us for a lost check, whether pre-stipulated or not. Whether it holds weight or not is up to a Judge.
On a side note, a check can be tracked and cancelled. So if the client doesn’t receive it (for whatever reason), it takes a simple phone call to kill it. Can they prove we collected a check? In the eyes of the client, yes, just by us simply marking the job was completed successfully at the end. Can we prove the check made it into the FedEx envelope? NO! Unless we’re in the movie business and like to create videos, and who here has the time to do that? The rest is in the tracking number. Can we prove the client didn’t lose the check on their end? Absolutely not, but it goes back to my last point: If we marked the job complete and successful knowing we had to collect a check, then we are saying we collected a check, so we need to keep this in mind when the “finger pointing” starts. This is why most lenders push the “wire” option, as it eliminates all this mess. Hope this helps!

Very true!
I guess it just comes down to how each individual interprets the wording and what they are comfortable agreeing to.
Based on this incident and also the subsequent emails this company sent me, the Signing Agent platform felt there was enough inconsistencies and indicators of possible fraud to start an investigation. I will definitely let you all know what happens in this link if something comes up.
Personally, I always read the fine print on these jobs because its not worth it to me to have potential issues that I could’ve possibly avoided. I rather error on the side of caution then to risk what I have worked so hard to establish. Thats just me and my thoughts though😊
Thank you for all the information.
I have definitely learned alot from this experience!

@dragonbkm that would be SA E&O. .not SS…unless we’re covered under the SS umbrella … Which IME rarely happens; title companies’ umbrella, yes…SS not as often

Very true! On as side note for those who may not already know, most E&O policies for notaries do not “commonly” cover anything outside of “notarial acts,” and the act of losing a check is not a “notarial act.” So unless the client is covered for that, or you don’t have that extra protection added to your policy, you may be held personally liable for the check. Based on this, if you “clearly” define your roles and responsibilities as a Notary Signing Agent (not just a Notary Public) to an insurance agent, most insurance companies will push you to a Professional Liability Policy as opposed to an E&O policy to get you the appropriate protection you need.

I once did a closing borrower gave me a check for $64,000 put it in envelope paper clipped to top of package next day I get a call from title company asking where the check was I told them it was in package they said it wasn’t called borrower he confirmed that he seen me clip it to docs called title back they were still looking for it. Few hours later I get a call saying they found it in a trash bin. Post closing threw it away with the fedex pak.

I would never in a million years agree to something like that.

I personally don’t like taking checks for large amounts to return with the packages. If something happens and the check gets lost (no matter the reason) the notary is likely to get blamed. Fortunately, most of my signers wire any money that they owe unless it’s a small amount (less than $1,000).

Isn’t wire transfer more widely used now for larger amounts? In the past, they were only accepted for amounts not exceeding $500 or so. I would have thought paper checks would have been a thing of the past by now - wire transfers were becoming more and more prevalent before I stopped doing signings.

Wire transfers are becoming the rule, rather than the exception. However, there are still some people who will give me a cashier’s check. I’ll put it at the front of the package and secure it with a binder clip where Escrow can’t miss it, but bad things can still happen.

Agree with @LindaH-FL regarding wire transfers.

For the Professional Signing Agent services I provide to Title/Escrow Companies [T/ECs], Lenders, & Realtors all require Funds Due (if greater than $500) to be wired to the T/ECs with 1 exception. For that lone T/EC, they will accept certified Funds Due (no personal checks) up to $1,500.