Companies that do not pay

Having a lot of problems with SIGNING STREAM, WONT EVER WORK FOR THEM AGAIN!!! My son is a notary and took a $60. signing, full blown refi with fax backs back in early February and has yet to be paid. After non response to him I got involved and sent invoices, then phone calls and first they said no W9 received. Well I knew that was not true because I uploaded it for him myself but I complied and sent it again. They promised payment in April then said no, now May since W9 not received. I submitted it yet again for a 4th time total and still no payment. I submitted another invoice explaining this would be the final attempt before I go to title company and mortgage company to inform them. Now they are responding saying they are cutting $5. for fed ex and whatever else they can think of but I am not going to let them get away with it. Im waiting on check and then will see how much they pay and let him decide if he wants to go after them. They are rated low and I told him start checking before he signs…several previous companies that were not bad have turned for the worst so it is a sign of how things are all over, not just our business slow.

I have been trying to get paid by Notary Spot for 1 year.

Do not do notary work for Lauth Investigations out of Indiana. I have been fighting with them on my money since March 21st. I told them to over night the money!

From now one I will do COD smaller companies that do not have a good credit reference.

Oh and the story gets better…after him doing the job, getting pkg to them etc. we are now passed 90 days and now they sent a page that says they are deducting $5. for checking notary packages, $10. for notary share of fed ex. the list goes on until he MIGHT end up with $20. unless they can figure out something else to charge and he could end up having to pay them for letting him do the signing! rofl YOU CAN TAKE IT TO THE BANK THAT SIGNING STREAM IS BLOCKED!!!

Since when is it the notary’s responsibility to pay for Fedex charges? What a joke that company must be.

Tell the company that is not paying you that if your check is not received in 3 days, you will contact the lender.

ed me from Feb 11, 2017. The latest word on another forum was they were “out of business” and I had not been able to get in touch with them 3-4 weeks ago.I sent several dozen emails to tech support. No one replied at all!!When I called title (Linear) the call taker said… well we paid them, and it’s too bad if they don’t pay you! We have no more to do with it!!! I was upset to say the least! Lo and behold… they PAID me on the 20th of

FILE COMPLAINT with TITLE INSURANCE OFFICE, ATTORNEY GENERAL OFFICE and ALSO FILE COMPLAINT WITH DEPART OF STATE against the NOTARY ( if the signing company is owned by the NOTARY)

I have a solution to your problem that every Notary should know about. LegalShield provides you the legal muscle you need when companies take advantage of small business owners/independent contractors like yourself.

Review: A notary saw the value in our legal services and immediately became a member. Within 2 days she contacted her law firm due to unpaid service invoices spanning twelve months. The law firm wrote a letter on her behalf to the respective title company on May 18, 2017. On May 22, 2017, she received a check in the amount of $870.00.

Contact my husband when you are ready to exercise your legal rights. 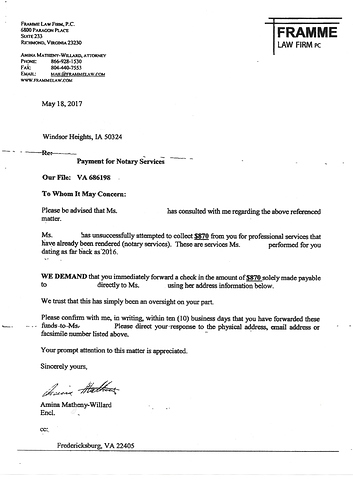 An attachment with sensitive information has been removed. If there are any questions, please contact supporat@notarycafe.com.

I sincerely apologize to my peers for this glaring oversight. The check attachment did have reference #s and names. Linda, thank you for highlighting this mistake. My objective, along with my husband, was to merely show there are organizations which provides notaries as well as micro and macro business owners assistance in recovering unpaid invoices.

SA-HOLDINGS- COMPANY THAT DOES NOT PAY!
3625 W. BROWARD BLVD , FT LAUDERDALE, FL 33312- contact#1-866-876-3863
I have an open invoice for services perfomed back in APRIL 2013. Have spoke to 6 people including
the Senior Acct Rep and have still not gotten paid. the senior acct rep even told me recently that money was tight…but my check would be issued in 2 weeks. that was a month ago. Now i call and they just dump my call to an after hours recording and its 11am. THIS A SORRY COMPANY… YOU WONT GET PAID

I have experienced the same thing with MortgageDocs.com. This guy Rudy is a scam artist. Their website says I was paid on May 1st for a March 15th assignment, but still no check in my mailbox! I even called their customer who has called Rudy on my behalf. They’ve also received no response. Stay away from MortgageDocs.com

I have started asking for direct assignment by the title companies I have worked for and especially the ones involved in the really slow pay cases. I have gotten a couple who are using me on a direct assignment basis and pay the fee shown in the settlement statement (usually $150.00)

You should not be involving the borrowers at all - they have already paid your fee and you have no recourse against them. Your fight is with your hiring party and all involved in getting the transaction to you - SS, title company, loan officer, escrow officer, lender. But absolutely not the borrower.

Absolutely, LindaH! We are contracted by the signing company, not the borrower - the borrower has no direct responsibility to us at all. Dunning the borrower is an excellent way to be sued. Personally, I spend enough time in court (attorneys here love to jump on failure in notary identification as a possible “out” for POAs being challenged by other family members, three times this year and it’s only July!) I do not enjoy the experience, nor do I wish to deal with the paperwork involving a claim on my E&O insurance.

MortgageDocs, NotaryGo… Tiny rates, never pay. Notary Direct - sad decline of a once decent company. National Loan Closings - slowwwww pay, never return calls, half of assignments will be no-shows and good luck getting a trip/print fee. Unless you are trying to rack up experience, don’t even bother.