I excepted an assignment from Nema Online Signing Solutions back in January of this year and have yet to get a response in regards to my payment. Has anyone else had a problem with payment?

I would pull up the signing order and reach out to the title company or lender directly. Let them know that you completed the assignment ( be prepared to provide proof) and have been trying to receive payment and have been unsuccessful. Ask them for assistance in the matter.

I have tried several ways of contacting. The number has been removed from snapdocs. I also looked them up online and found a number to contact but still unsuccessful. Left messages and emails. I had a number on my cell phone call log but it doesn’t work.

PM the info you have and let me see what I can find for you. The name of the loan officer/ Title company etc

@ontherun1 Have you received payment yet, or a response? I’m still waiting on payment for signings I did in March and May for them. I’ve emailed them to no response.

You’ll have to fight for your money. I decided to leave them alone. In God’s hands now. Everytime i called i was told check was mailed but never received.

Same here. They changed the terms of the pay to 90 days after I accept it as 60 days. It’s not right for notaries to do the work and not receive payment.
Have you received it yet ???

I have done a signing for them a while back, they did pay after 30 days. This is the info I have for NEMA. Hopefully this helps. 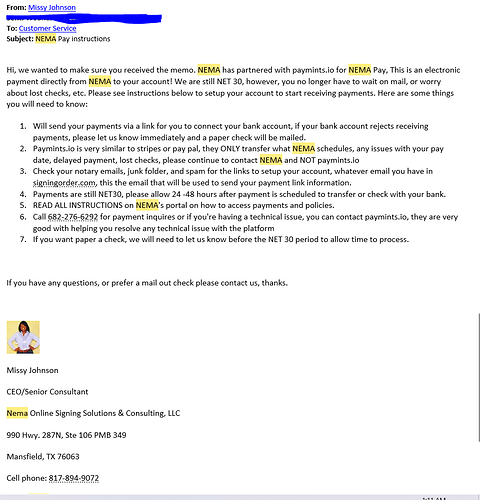 Do you remember when you did the signing for them?
In April, they emailed me saying that they were victims of a fraudulent attack and that caused payments to be backed up. They said to expect payment in 75-80 days.

Yep…one of the many excuses used for non-payment; let’s see

I did the signing in June. Already received payments from them.

@ontherun1 Just checking in to see if you’ve been paid yet . . .

I did note that you said: “I decided to leave them alone. In God’s hands now.”

If you’d like some time-tested insights about how to proceed with receiving payment, please see the following post by @rparker from the Notary Cafe GOLDMINE database:

Demand Letter for non-payment? Have you ever? Looking For Advice

I had that happen to me. Here are the steps I was told to take and it worked. You need to contact the title company who used the signing service that contracted with you. If they refuse to help, let them know you holding them responsible. If they refuse to get the service to pay or to pay you, send 3 emails with a copy of the invoices attached marked PAST DUE, spaced about a week or two apart requesting payment with the warning that unless payment is made, you will be taking further action…

This topic was automatically closed 90 days after the last reply. New replies are no longer allowed.